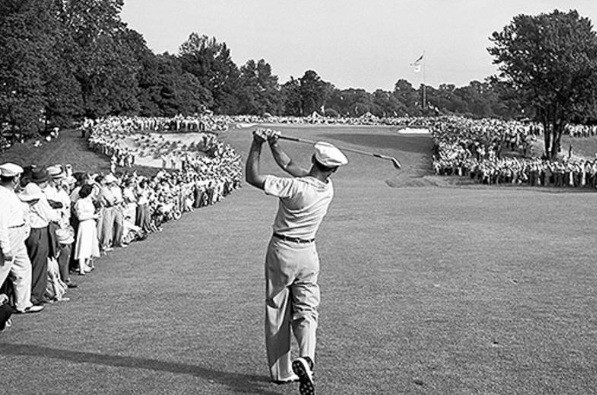 How Ben Hogan Discovered His Secret

Ben Hogan had a swing secret, and he discovered it when he was in
hospital after the car crash in 1949. Here’s proof…

On page 30 of The Stress-Free Golf Swing there’s a quote from a golfer
that played with Ben Hogan in 1950. And Ben told him about a dream
he had in hospital, of a Scottish golfer performing a special swing move.

Hogan told this golfer that he was about to play with, that he was going
to use the special move when he played with him. Here is the end of the
quote on page 30 of The Stress-Free Golf Swing…

“…To shorten a long story, Hogan kept his word and proved to me that
dreams can come true. He had the most efficient swing I had ever seen,
and never once hit a bad hook shot. He was in full control of his game.”

On pages 31 and 32 in The Stress-Free Golf Swing, you can see before and
after pictures of Ben Hogan’s swing, and this one secret move that proves
he indeed added something to his swing after the accident that improved his ball
striking.

Look, we live in a fast paced time, and golf should be relaxing and stress-free.

But when you’re fighting your golf swing, golf is certainly NOT stress-free, is it?

However, when you try The Stress-Free Golf Swing by going here, you’ll finally
be able to hit the ball properly and control where it goes with ease. Here’s some
other benefits you’ll enjoy with this:

– You will only have one move to learn and perfect, which makes the golf swing
incredibly easy. And I bet you’ve never worked on this one move before.

– You won’t have countless “to do” lists in your head as you swing. You can play
golf instead of playing ‘golf swing’.

– You will swing with more power and control with this one move. As a result you
will hit the ball longer, straighter and more consistently than ever before.

– You’ll finally have a golf swing you can trust, because it’s simple and effective.

– You’ll have good, consistent ball striking from one game to the next – even if you
only play once a week if you’re lucky.

– You’ll have a body-friendly swing. Hogan’s ball striking improved the older he got,
and very soon you’ll be able to do the same.

To find out more about The Stress-Free Golf Swing, simple go here:

By continuing to use the site, you agree to the use of cookies. more information